So you think you may have been unfairly dismissed from your employment?

Time is limited to lodge an appeal and you need to speak to someone now.

Workers First offers a FREE, no obligation consultation for workers in these situations and we are passionate about workplace justice and the rights of workers.

If you have a workplace issue you would like to discuss, please give us a call or send us an email.

Workers First offers a FREE online clinic between 6PM and 7PM each evening via the FREE chat link on our webpage.

You might even consider becoming a member for as little as $1 a day. For people working in Police and Corrective Services industries and related security and investigation, we offer an Ultimate Membership at $2 a day.

Juniors have a special rate available to them at just 50c a day, up to the age of 18.

Posted by Workers FIrst at 09:34 No comments:

Posted by Workers FIrst at 04:37 No comments: 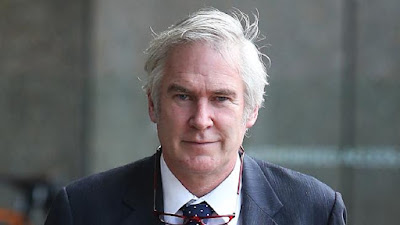 Fair Work Commission vice-president Michael Lawler
The independent inquiry headed by retired Federal Court judge Peter Heerey QC could see Mr Lawler removed from office after he took more than nine months of sick leave while supporting his partner Kathy Jackson in legal battles against the Health Services Union.
Changes to members appointed to hear cases in specific Fair Work panels — or industry sectors — are overseen by Fair Work president Iain Ross. After the ­retirement of several members this year, a number of panel changes have been made.
The alteration to Mr Lawler’s role, announced on the Fair Work website on November 16, shows he has been deleted from the government services panel of ­industries headed by vice-president Joe Catanzariti and moved to a panel known as the media, ports, oil and gas panel, headed by vice-president Graeme Watson.
According to those close to the commission, Mr Lawler’s transfer out of the government employment and services panel was ­regarded as necessary as he was under investigation at the instigation of the federal government, giving rise to the potential for perceptions of a conflict of interest.
Mr Lawler’s role on a new panel now puts him in a position to deal with broadcasting, publishing and journalism.
Another element of the Fair Work reshuffle appears aimed at ensuring a conflict of interest does not arise with Mr Lawler’s personal life. Mr Lawler’s new panel included the health industry — known as health and welfare services. This has now been chopped from his new panel, and sent to his previous panel.
Ms Jackson, formerly HSU national secretary, has spent several years fighting the health union in court. This year she was found to have rorted $1.4 million in union funds to spend on herself, including on mortgage payments and international holidays. The Federal Court has ordered Ms Jackson to repay the funds and, yesterday, added $1m in ­interest and court costs.
Mr Lawler, who has a salary of $435,000, was originally blocked from any further dealings with the health industry in late 2008 after complaints to then president of the commission from senior health industry figures who had become aware of his relationship with Ms Jackson.
The Fair Work panel reshuffle is academic for the time being insofar as Mr Lawler is concerned, as he has resumed sick leave. There has been no indication of when or if he will return to work. However, the moves signal the sensitivities and controversy inside Fair Work around Mr Lawler’s role and his relationship with Ms Jackson.
Between May last year and July this year Mr Lawler took nine months of sick leave. In late October this year he embarked on a new round of sick leave, adding two months to total 11 months of sick leave.
After a months-long investigation by The Australian revealed Mr Lawler’s sick leave and his involvement at the same time in numerous legal matters on behalf of Ms

Jackson, the federal government announced the inquiry into his behaviour. The terms of reference for the Heerey inquiry include whether there are grounds for Mr Lawler’s removal by a vote of both houses of parliament for misbehaviour or incapacity. This is the only way he can be removed or disciplined.

The deadline for the Heerey report has been extended by two months until the end of February after Mr Lawler requested more time to answer questions, due to illness. Mr Lawler argued in an affidavit to the Federal Court this year that he has been mentally ill. The affidavit was primarily to explain his role in attempting to transfer Ms Jackson’s property into his own name ahead of union attempts to freeze her assets. His involvement in Ms Jackson’s legal cases, including in the preparation of large amounts of legal material to be presented to the trade union royal commission, as well as appearing in the Federal Court case against the HSU, has overlapped with his sick leave. Justice Ross, appearing before Senate estimates in October, said he had sought and received Mr Lawler’s assurance last year that he would not participate in further Federal Court hearings on Ms Jackson’s behalf (as he had done on June 20 last year to represent her).
“Mr Lawler made a number of assertions in an email to me of June 16 this year,” he told the Senate. “This included his view that accompanying his partner to court proceedings ought not to be something that would cause damage to the commission. In response … I informed him of my view that the reputation of the commission and his own standing as a member were being damaged by his continuing public involvement in the proceedings involving his partner and that he should cease attending the proceedings in any capacity.”
Justice Ross told the Senate that he would provide all correspondence between him and Mr Lawler to Mr Heerey’s inquiry. He said he opposed requests to simultaneously produce the same correspondence in Senate estimates. As the material was in the domain of the Heerey terms of reference, providing it to a public estimates hearing risked prejudice to the Heerey inquiry.
Separately, a decision made by Mr Lawler in a case he heard on September 10 — during the interregnum when he returned to work for a few months — has been overturned. Mr Lawler heard the small unfair dismissal case — Brandy v BMD Constructions — the day after he participated in a filming session for television. His decision was appealed and overturned with the agreement of both parties due to a jurisdictional error made by Mr Lawler. A full bench ruled the case would be re-heard by another commissioner.
Source: The Australian, Michael Lawler removed from hearing government cases (3 January 2016) <http://www.theaustralian.com.au/national-affairs/industrial-relations/michael-lawler-removed-from-hearing-government-cases/news-story/c890814eee677b22444f84acb00e141c>

Posted by Workers FIrst at 03:47 No comments:

Workers First is proud to offer workers a real alternative to handle matters such as unfair dismissal disputes before State and Commonwealth decision makers.

If you have been dismissed, please contact Wokers First urgently to discuss you matter and determine the best way forward for your case.

Non members of Workers First will be charged for services they use in the event advocacy and representation is required.

Posted by Workers FIrst at 00:05 No comments:

Workers First is proud to offer workers a real alternative to handle matters such as unfair dismissal disputes before State and Commonwealth decision makers.

If you have been dismissed, please contact Wokers First urgently to discuss you matter and determine the best way forward for your case.

Non members of Workers First will be charged for services they use in the event advocacy and representation is required.

Posted by Workers FIrst at 06:45 No comments: